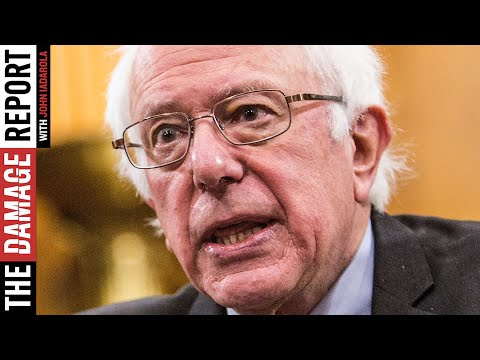 Bernie Sanders loses it on a reporter for good reason. What was the reason? John Iadarola breaks it down on The Damage Report. Follow The Damage Report on Facebook: https://www.facebook.com/TheDamageReportTYT/

"Bernie Sanders is apparently reassessing his campaign going forward (though not dropping out yet), and when asked about his timeline by a CNN reporter today, he got pretty testy.

During a press gaggle, CNN’s Manu Raju asked him about his campaign and Sanders responded, “I’m dealing with a fucking global crisis. You know, we’re dealing with.”

Raju tweeted he asked again about his plans and said Sanders responded, “Rght now I’m trying to do my best to make sure that we don’t have an economic meltdown and that people don’t die. Is that enough for you to keep me busy for today?”"

https://www.youtube.com/watch?v=2nJCi90Cgzc Herschel Walker gets exposed by ex-wife horror stories in new ad put out by Republicans ahead of the Georgia Senate election. John Iadarola and...

https://www.youtube.com/watch?v=kU1tZoGo6W4 Four Muslim men have been targeted in a string of killings leaving residents in Albuquerque, New Mexico scared to leave their homes. John Iadarola...

https://www.youtube.com/watch?v=lM8CcAdm020 Donald Trump and the right-wing freaks out after the unprecedented FBI raid of Trump's Mar-a-Lago residence. John Iadarola and David Shuster break it down...

https://www.youtube.com/watch?v=20hpvg604QU Jim Thorpe rose to world fame as a mythic talent who excelled at every sport. He won...

https://www.youtube.com/watch?v=2nJCi90Cgzc Herschel Walker gets exposed by ex-wife horror stories in new ad put out by Republicans ahead of...